After the accession of Crimea to the Russian Federation, the announced Belarus alignment on the Russian policy towards Ukraine did not happen. The Belarusian authorities did not deny the alliance of Belarus with the Russian Federation but also did not formally recognize Crimea as a part of Russia, and refused to send observers for the Crimean referendum. In the opposite, President Lukashenko attended Poroshenko’s presidential inauguration and showed some reluctance to a potential Federalization of Ukraine (Shraibman-2016).

Regarding the Donbass, Minsk has insisted on maintaining Ukrainian territorial integrity. On January 17, 2015, the Ambassador of Belarus to Ukraine stated that “Belarus supports Ukraine as an integral unitary state under the current Constitution which excludes federalization” (Benno-2018). Since 2014, Belarus and Ukraine have maintained positive relations. This continued even after the election of Zelensky in 2019. In that year, the two presidents met and approved an annual roadmap regarding the relations between the two countries (Benno-2018).

However, these positive relations have gradually declined, particularly after the last presidential election in Belarus. With the current crisis between Russia and the West, the relations between Belarus and Ukraine kept worsening. Thus, it is interesting to understand the reasons of the Belarussian position regarding the crisis in Ukraine and the current military situation.

Two reasons have influenced Belarus’ initial position towards the conflict in Ukraine, the first one is economic and the second political.

The two main reasons influencing Belarus’ position regarding the conflict in Ukraine:

Economically, Ukraine has been a major trade partner for Belarus. The economic ties between the two countries were close and the two nations had to maintain constructive relations. In 2014, Ukraine was Belarus’ second trade partner, as shown in the figure below.

Ukraine imported the equivalent of $2.278,059,50, making it the second largest buyer of Belarussian products. Ukraine also represented the country with which Belarus had the highest trade balance. Consequently, maintaining positive relations with Kiev was vital for the Belarussian economy.

Moreover, the crisis between Russia and Ukraine was an opportunity for Minsk to play a key intermediary role in Ukraine’s trade with the Eurasian Economic Union, and Kiev would have been interested in increasing its energy imports from and through Belarus. Also, plans to cooperate in developing the Baltic-Black Sea transport corridor as well as in agriculture and energy were made. Minsk successfully became an air transportation hub between Russia and Ukraine when direct flights between the two countries became prohibited (Nizhnikau and Moshes-2018). Another reason explaining the durability of Minsk’s position was the fact that it benefited from the European Union’s (EU) sanctions towards Russia by becoming the transit country of banned EU products in Russia.  Indeed, the country re-exported products from the EU that were sanctioned to Russia. This included fish, fruits, and dairy (Yeliseyeu-2017).

Politically, Belarus presented itself as a neutral state, and offered a platform to negotiate a solution to the Ukrainian crisis, a situation that was accepted by Western leaders. The crisis in Ukraine was an opportunity for Minsk to have a stronger regional role. Minsk became the main platform of negotiation to resolve the conflict in the Donbass. This resulted in two “Minsk Agreements” on the Ukraine conflict in 2014/15. Minsk also showed an interest to be part of a possible UN peacekeeping mission in the Donbass (Benno-2018). This strategy has significatively impacted on the relations with the EU, since in 2016, most of the sanctions imposed by the EU were lifted (before being re-implemented particularly after the 2020 election) (Marin-2016).

Nevertheless, the relations between Ukraine and Belarus worsened, and the Belarussian position towards the crisis in Ukraine became clearer over time.

The deterioration of the relations between the two countries has, to some extent, been influenced by the fact that Kiev did not recognize Lukashenko as the legitimate winner of the 2020 election. Zelensky has even called for a new election (Zinets and Williams) and followed the EU in the imposition of sanctions against Belarus (Carboni-2021). This also impacted on the economic sector since Kiev introduced a 35% duty on imports on Belarusian buses, lorries and special purpose vehicles and in response, Belarus introduced the possibility of certifying Ukrainian importers of 17 product groups for a period of six months (Iwanski and Zochowki-2021). In addition, the Belarusian authorities accused Ukraine of using the migrant crisis to concentrate troops at the Belarussian border. The Belarusian leader pointed out that a special operation was underway on Ukraine’s border with Belarus (TASS-2022).

With the increased tensions between Russia and the West over Ukraine, relations continued to deteriorate, and the Belarusian defense ministry accused Ukraine of repeated violations of Belarus’ airspace by Ukrainian aircraft (Reuters-2021). At the same time, Kiev believed that a hacker group linked to Belarus carried out cyberattacks that hit Ukrainian government websites (Polityuk-2022).

In November 2021, Belarus and Russia agreed on 28 Union State ‘Programs, including an approval of a joint military doctrine (Rferl-2021). The doctrine ensures a higher level of interaction between the ministries of defense (TASS-2021).

In January, in one of his speeches, Lukashenko made clear that there will be a war in two conditions, if Belarus suffers a direct aggression, and if the Russian suffers a direct attack (meaning that Belarus would intervene on the Russian side) (TASS-2022).  Russia and Belarus have carried out joint military drills and it is estimated that there were about 30,000 Russian troops to Belarus for military exercises (beginning of February 2022) (Gramer-2022). More recently, Belarus supported the Russian military operation in Ukraine.

Russia as a natural ally:

In 2014, Belarus feared that the Ukrainian situation would encourage pro-Russian forces to demand a stronger integration to Russia, which would have had existential repercussions for Belarus (Kuleszewicz-2016). A considerable number of the Belarusian population is nostalgic to the Soviet past and see a Union with Russia as positive, and the country is historically and culturally close to Russia.

This situation seems to have incited Minsk to adapt their foreign policy to the national and regional context. Nevertheless, in terms of foreign policy, Russia is the closest and oldest ally for Belarus, and its disagreements with Russia seem only to be sporadic, and do not impact substantially on their position regarding regional crises. For example, in 2014, at the UN General Assembly vote, Belarus supported Russia regarding Crimea.

The two countries have a common history, solid economic relations, and a strong military alliance. Belarus is extremely close to the Soviet past, symbolized by Moscow, and it has been maintained as the main national identity of Belarus. In other words, Lukashenko tries to differentiate his country from Russia without denying the deep connections between the two countries. This approach can be symbolized by a sentence he pronounced during the 2014 State of the Nation Address regarding his view of the languages of his country, where he said that” if we lose the Russian language, we will lose our minds”, but “if we stop speaking the Belarusian language, we will cease to be a nation” (President of the Republic of Belarus-2014).

Belarus in the intervention in Ukraine:

Militarily, it seems that the operation of the Russian Federation in Ukraine was done through three sides. The first one was carried out from the Eastern part of Ukraine, the second one from the South (Crimea) and the third from the North, meaning that it was carried out from Belarus. The Belarussian president ordered its army to integrate and cooperate with the Russian army in the intervention, but his army was not involved in entering the Ukrainian territory (The Moscow Times-2022). This shows that Belarus supports its ally but does not want to be fully involved in the conflict.

A number of ballistic missiles were launched from Belarus and hit various targets inside the Ukrainian territory. In addition, a series of military vehicles entered Ukraine through Belarus. Forces entering from there captured Chernobyl, including the power plant, and went in the direction of Kiev. 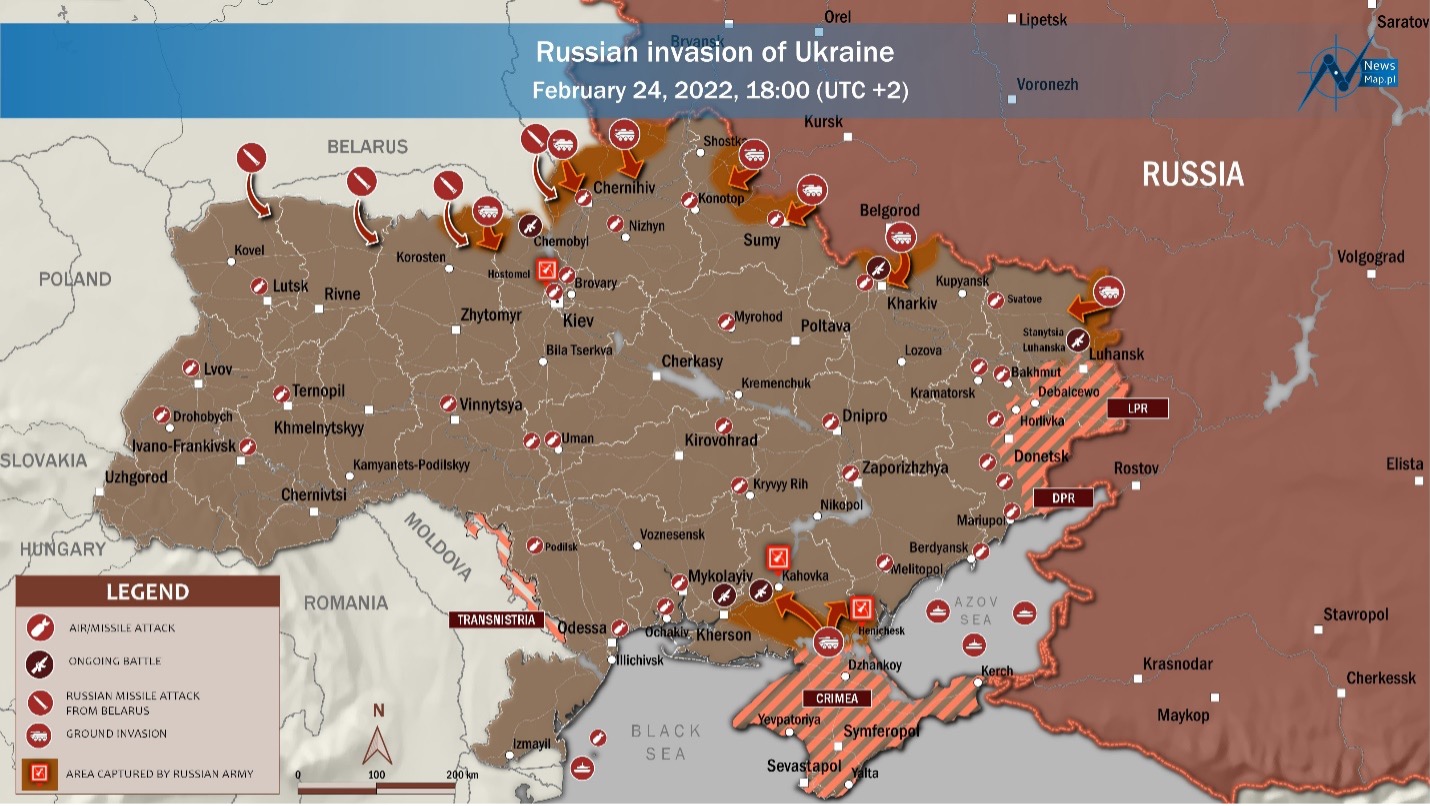 The first two days of the intervention show that the priority of the Russian forces is the destruction of the main military infrastructure (demilitarization). In its first two days of the intervention, it destroyed airbases, airports, air-defense facilities, ammunition depots… The goal could be to destroy military capacities of Ukraine that would not be able to carry out offensives against Donetsk and Lugansk, formally recognized as independent states by the Russian Federation.

The military operation seems to have three main objectives. The control of the totality of the Donetsk and Lugansk region by the two republics, the control of the regions of the black Sea and the Sea of Azov in the South of Ukraine, and the encirclement of Kiev, for a potential regime change. This could be used in providing a “neutralization” and a decentralization of Ukraine. What is certain is that the advancement of the Russian troops changes the balance of power and gives a stronger weight for Russia for the future negotiations with the West.

The Russian MOD spokesperson stated on February 24th that 74 ground facilities of Ukraine’s military infrastructure were destroyed. Among them were 11 airfields, 3 command points, a navy base, and 18 radar stations of S-300 and BUK-M1missiles systems. Also, 4 of the 6 Bayraktar TB-2 combat drones have reportedly been destroyed (The Moscow Times-2022). Another result of the intervention includes the unblocking of the North Crimean canal to restore water supplies to the Peninsula of Crimea. Before that, the blocking of the canal was causing water shortages in Crimea.

Furthermore, when it comes to NATO’s position towards Belarus, a number of sanctions against Belarusian banks (including Belarussian Bank of Development and Reconstruction Belinvestbank Joint Stock Company, Belinvestbank), defense industry, and security officials (including the minister of Defense of the country) were implemented over the support for the Russian intervention (US Department of Treasury-2021).

Having said that, the operation in Ukraine shows the strong cooperation between Russia and Belarus and the increasing militarization of the Baltic States and Poland, as well as the sanctions from the West will reinforce Belarussian-Russian relations, even if Belarussian troops would not be directly involved in the conflict.

Moncef Fellah has worked for various consulting companies and at the United Nations. He has participated in projects located in different countries. He has an international personal and professional experience, as he lived in more than five countries, and he speaks four languages fluently. He is specialized in the Eastern European region, and decided to focus on this area during his Masters degree at the University of Montreal. His main research interests include the relations between Russia and the West and Russian foreign policy. Moncef had the opportunity to study and to work in a couple of Central and Eastern European countries, and has notions of Russian language.