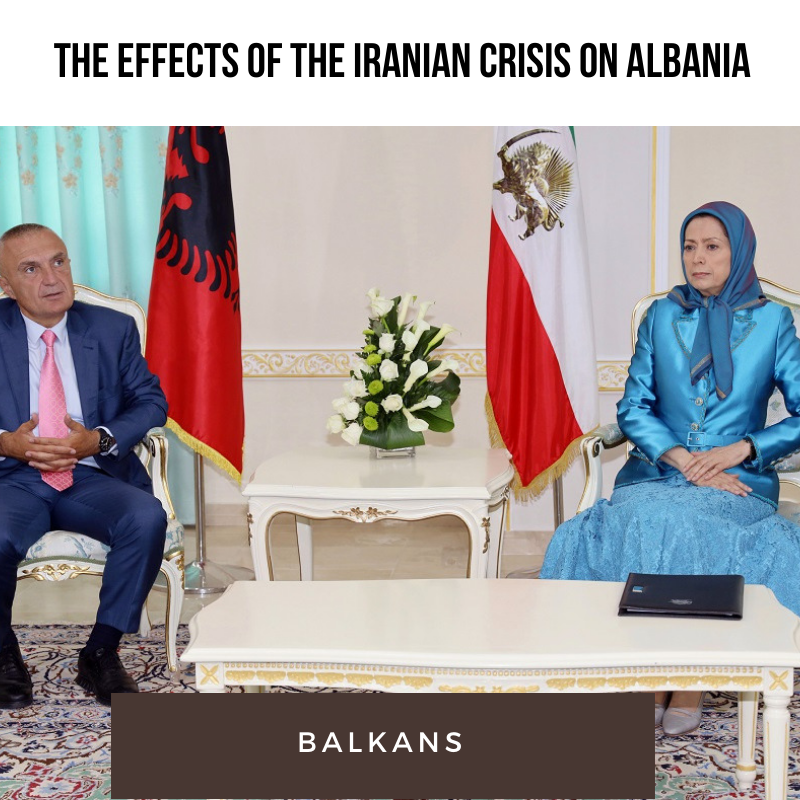 During the press conference on the 8th of January, that followed the assassination of Soleimani, Ayatollah Ali Khamenei labelled Albania as a western-backed antagonist country that seeks to interfere with the Islamic Republic and foments the conflict in Iran1. In his speech, Khamenei addressed to Albania implicitly: not only by inferring that Albania is supporting a Western plan against the Islamic Republic, but also referring to the asylum that the Albanian government concedes to Mujahedin-e Khalq (MEK) members2. This first comment generated a verbal back and forth between the Albanian and Iranian government, in which President Meta highlighted that Albania is a democratic country, cooperating with the U.S. and NATO in the war against international terrorism. Furthermore, Meta condemned the Iranian missile attacks on the two U.S. bases located in Iraq, calling it a risky manoeuver that can bring instability to the whole region. Specifically, on the MEK, a new reply came by the Albanian Prime Minister Edi Rama, who justified the presence of MEK’s members on the Albanian soil by recalling the spirit of the country, founded on multiculturalism and hospitality. It is worth to recall that the Albanian acceptance of MEK’s members in the territory is also the result of an agreement with the U.S3 in 20134. The verbal exchange between the two governments resulted in a diplomatic escalation: on the 15th of January two Iranian diplomats have been expelled from Tirana because of their current status, deemed incompatible with their duties in the country. This decision falls in line with the previous act of the Albanian government, that expelled the Iranian diplomat from the country back in December 2018.

Given this precedent, it is understandable that tensions between Albania and Iran existed regardless of the recent Iranian crisis. Teheran never tolerated the support of Tirana to the MEK, which started in 2014 and currently continues with more than 3000 MEK’s members on the Albanian sole. The MEK is a dissident group exiled from Iran since 1986 and started in 1965 under the form of Islamic socialist movement5, in a constant fight with the former leader Shah Mohammad Reza Pahlavi. Following the fall of Pahlavi during the 1979 Islamic Revolution, the MEK clashed with the new leader of country, or Ruhollah Khomeini. In 1986, the MEK had no other choice than relocating in Iraq6 and allying with Saddam Hussein in his war against the Iranian government7. From this moment the MEK started his permanence in Iraq, where it enjoyed a period of relative calm until 20098. The Iraqi political environment evolved from 1986 and at the beginning of the new decade the Iranian influence became that relevant in Baghdad to force the exile of the MEK. Supported by the U.S., the MEK successfully exited from Iraq and relocated in Albania in 2013.

MEK’s relationship with the U.S. has changed through the time: the group passed from being a threatening international terroristic organization, as recognized by Clinton’s administration in 1997, to be a valuable ally in the opposition against the current Iraqi government.The U.S. presidencies are not new to such change of perspective, as happened in the case of Afghanistan9. The MEK had been enlisted among the foreign terrorist organizations, not only to satisfy the desires of Teheran10, but also because of its turbulent past11 in which the MEK conducted different attacks against U.S. military force in Iran. In the U.S. the removal of the MEK from the terrorist groups’ list has been received amid doubts: not only because the removal permits to the group to operate in the USA, but also because American administrations had already shown in the past that supporting Middle Eastern militias can backlash severely. In this framework, the MEK well integrated in the U.S. alliance of Middle East, engaging relations, military training and trades with Israel and Saudi Arabia. The relationship with the Saudis seems not to fall in line with the socialist creed of the MEK, as the autocratic regime in Saudi Arabia does not embrace MEK’s policies such as gender equality and democracy. Nevertheless, the bond between the two parts is well consolidated: MEK events usually host Saudi officials and speakers.

The Albanian ties with the U.S. consolidated with the adhesion to NATO. Albania is an official NATO member since 2009, but its cooperation with the international organization started in the early 90s. The country joined the North Atlantic Cooperation in 1992 and the North Atlantic Assembly in 1993, while, with the approval of the Individual Partnership Programme (IPP), the country obtains the first NATO’s partnership in 1995. The international organization benefitted of the geographic position of Albania during the Kosovo crisis and the institutional ties became closer: NATO Defence officers organized a joint air exercise of NATO over Albania and Macedonia; while NATO’s operations in Serbia against the Milosevic regime were made possible thanks to the cooperation and position of Albania, constituting a milestone in the relationship between Tirana and NATO. The Albanian commitment to the Alliance activities increased with the official membership: recently, Tirana operated in the NATO ISAF12 mission in Afghanistan, with more than 330 troops distributed on the Afghan sole.

Despite the ties with NATO and the U.S., the Iranian crisis can still represent an element of risk and instability in Albania. The raise of tensions in Iran during the first half of 2019, initially represented a moment of peace in the Balkans, that was experiencing turmoil in countries such as Georgia, Ukraine and was under the scrutiny of the international community. Now, Teheran may constitute a menace especially for Albania, given the close ties with the U.S. This eventuality is witnessed by the findings of the Albanian police that recently discovered a terrorist cell on the territory, ran by the Iranian Revolutionary Guards. According to the Albanian intelligence, the organization was planning to attack members of the MEK and targeted a Bektashi13 ceremony in Tirana, attended by exiled MEK members. With the killing of Soleimani, who ordained these attacks, the menace is not over yet for Albania and the MEK members. The new leader of the Qurds Forces, Esmail Qaani, embraces the Soleimani’s policies and vowed revenge for the assassination of Soleimani, targeting the U.S. and its allies.

It is difficult to forecast the result of these growing tensions, but it is fair to say that now those at most at risk are the MEK members. As witnessed by the Middle East Eye , many MEK members, but also defectors, are now in a condition of distress as they struggle to see a positive future. Even if they will not be targeted by the Qurds forces, MEK’s members and defectors remain in a condition of forced exile. This condition is likely to perdure until the existence of the Islamic Republic, and so this context strengthens the tripolar relationship Albania-MEK-U.S. Albania might need to be cautious with his role within this axis: if the relationship between Iran and the U.S. will worsen, Tirana risks to be involved in an international conflict that it does not want to be a part of. This eventuality will depend on the American diplomatic skills, as U.S. reiterates that it is not seeking a conflict and it is concerned on the MEK’s status. Still, if the U.S. will deem the conflict necessary, it can count on the NATO alliance and the favorable proximity to the target of Israel and Saudi Arabia.

1“[…]A few days before the incident of Aban – the incidents related to gasoline and other economic matters – an American agent as well as a few mercenary and treasonous Iranians gathered together in a small, really malicious and evil, European country to design schemes and plot against the Islamic Republic […]”. Complete transcript of the press conference available on: http://english.khamenei.ir/news/7294/Ayn-al-Asad-was-merely-a-slap-but-the-U-S-must-leave-the-region

3Currently, the memorandum of the Albania-US agreement has been removed from the us.gov official site

4In 2013, the Obama Administration sealed a deal with the Albanian government,offering asylum to an initial amount of 250 MEK’s members.

5MEK originated as a militant movement founded on Islamic and Marxist ideologies, in a mix of Nationalism, socialism and Islamism. The faction has been led by Massoud Rajavi until his exile in Iraq forced his wife, Maryam Rajavi, to take over.

7One there, MEK constituted the 7,000-member National Liberation Army (NLA), operating as part of the Iraqi military forces

9Operation Cyclone: the CIA program to arm, finance and train mujahideen in support of the Democratic Republic of Afghanistan, fighting against the USSR’s attacks. The U.S. supported Afghanistan applying the Reagan doctrine, as the Soviet invasion represented a conflict that had to be won, according to the U.S.,as vital in the context of the Cold War.

10As confirmed in a recent interview to Middle East Eye by Raymond Tanter, in service at the U.S. security council during the ‘80s

11Before the Islamic Revolution of 1979

13Originally one of many Sufi orders within orthodox Sunni Islam, the Bektashi order in the 16th century adopted tenets of the Shīʿite sect, including a veneration of ʿAlī, the fourth successor of the prophet Muhammad, as a member of a trinity with Allah and the Prophet himself. (Encyclopædia Britannica, April 2017)