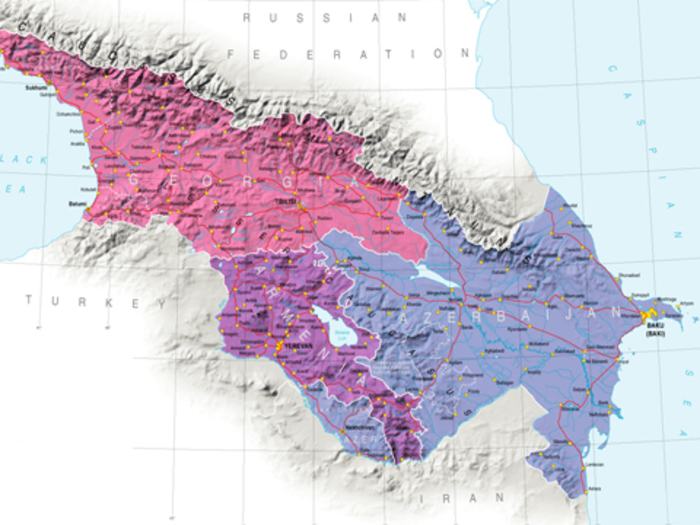 Recent geopolitical developments in Eurasia indicate that the South Caucasus’ relative importance could be overshadowed by West-Russia competition over Belarus, Ukraine and Central Asia. This trend was quite visible during Mike Pompeo’s visit to Belarus, Ukraine, Uzbekistan and Kazakhstan which laid out the US administration’s priorities in the former Soviet Union for 2020 and well into 2021. Yet another reason for the South Caucasus’ ambiguous position is Russia’s growing concern with Minsk and Kyiv in the west and Tashkent’s maneuvers to eschew to Moscow’s attempts to expand its influence over these geographically and economically important states.

The South Caucasus plays an important role in the US/EU’s strategic calculus. One of the biggest imperatives of since the breakup of the Soviet Union was to enable newly independent Georgia and Azerbaijan to use their geographic position as a nodal point in the nascent South Caucasus energy and transport corridor. For the West the effectiveness of the South Caucasus corridor would potentially underpin a much bigger project, the Trans-Caspian Corridor (consisting of a pipeline, intensive port-to-port contacts, etc.), which, though still only an idea with some minor success (successful division of the Caspian seabed among the littoral states reached in August, 2018), but could, under altered circumstances, become a geopolitical reality.

All these initiatives inevitably increase the South Caucasus’ independence against Russian (old Soviet) transportation networks as the Caspian Sea oil and gas resources open up to the West.

Though important geopolitically, many politicians and analysts in the South Caucasus at times tend to overemphasize the role the region plays in the West’s and Russia’s foreign policy. In fact, what various recent political and economic trends in the region show is that major geopolitical battle grounds will be opening up elsewhere in Eurasia far beyond the South Caucasus.

A partial reason for this is Russia whose geopolitical attention since 2014 has been primarily diverted to the Ukraine crisis. Moreover, for the past year or so, Moscow increased its efforts in other directions. In relations with Belarus, which has traditionally pursued a pro-Russian policy, Russia raises the ante by reportedly demanding the territorial, economic and military merger as a part of the agreement signed between Minsk and Moscow in December 1999. As Belarus successfully resists Moscow’s efforts, it is likely that the Kremlin’s moves to influence Belarus will continue to grow in 2020-2021. Another central issue will be Ukraine, where Moscow and Kyiv have reached some understanding on the need to de-escalate the situation in Donbas and find a long-term solution to the problem.

Another region which will be an active theater of Russian diplomatic and economic moves is Central Asia. There, Uzbekistan with its industrial and political might and resting on a fertile Fergana Valley and bordering on four other Central Asian states, the country is a key to Moscow’s geopolitical ambitions. Various reports emerged throughout 2019 indicating that Moscow was in active negotiations with Tashkent to have it join the Eurasian Economic Union. There are also indications that Tashkent is resisting the idea and the probability is, at least from the open source material, that Uzbekistan will join EEU as an observer.

This regional context is important to understand the evolving importance of the South Caucasus for 2020-2021. Belarus and Uzbekistan (on top of Ukraine) represent those focal points in the Eurasian landmass where the US’ and to a lesser degree the EU’s attention will drawn to. Indeed, during his recent visit Mike Pompeo did not tour the South Caucasus, but visited Belarus, Ukraine and the Central Asian region (specifically Uzbekistan and Kazakhstan) to increase western efforts in battling Russian initiatives. The visit was followed by the publication of a new US strategy document for Central Asia further indicating a growing role of the region in the western perspective.

These long-term trends show that Russia’s large political and economic moves are not expected in the South Caucasus. The situation in the region remains complex, but it nevertheless is relatively stable as Russian military and economic presence is predominant. Moscow has reached a certain limit to its power in Georgia, where through Abkhazia and Tskhinvali Region, it successfully prevents Tbilisi from becoming a NATO/EU member. In Armenia too, which is Russia’s closest ally in the region, Moscow achieved its primary geopolitical goals through the stationing of its troops as well as buying Armenia’s strategic infrastructure capabilities. This is while Azerbaijan tries to pursue a balanced, one might even call an independent foreign policy based on its large revenues and influence from oil and gas trade as well as strategic position at the Caspian Sea. However, as long as Baku has an unresolved problem of Nagorno Karabakh, Russia is not particularly worried about Azerbaijan’s geopolitical goals.

This creates an interesting geopolitical picture in the South Caucasus when Russia is unlikely to make any particularly ambitious moves as its vital interests are secured for the foreseeable future. Hence, Moscow’s larger economic and political attention will be drawn to other regions such as Belarus, Ukraine and Central Asia.

The South Caucasus’ relative inconspicuousness in regional geopolitics was also well apparent in the Iran crisis which broke out this January following the general Qasem Soleimani’s killing in Baghdad. Geographically bordering on Iran, it was expected by many in the analytical community that the Soleimani crisis could increase the US/EU interests in Georgia, Armenia and Azerbaijan. However, compared to the western attention paid to Iraq, Persian Gulf or Afghanistan amid the Iran-US confrontation, there was little similarity in the US/EU thinking regarding the South Caucasus.

Surely, this is not to say that the South Caucasus’ importance declines in the Eurasian affairs. The region remains an important transit corridor connecting the Black and Caspian Sea. Moreover, it also connects Central Asia to Eastern Europe and serves for Russia as a connection point with the volatile Middle East. These basic geopolitics will keep the South Caucasus crucial to the regional players.

However, when compared to other regions across the Eurasian landmass which, as we argued above, are bound to be geopolitically active, it is clear that for the West and Russia, Belarus, Ukraine and Central Asia will of bigger importance for the rest of 2020 and well into 2021. There is too much economically at stake in these aforementioned regions. Since Russia’s interests in the South Caucasus are well-preserved for the foreseeable future, it is unlikely to expect any significant political and military moves from Moscow.