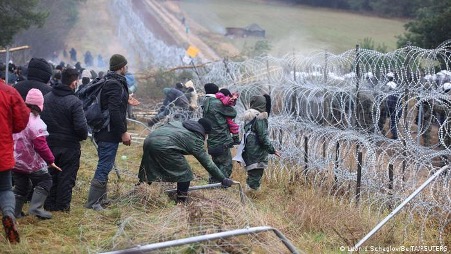 Geneva, November 11. Thousands of migrants have attempted crossing into Poland this Monday, November 8. It appears that this event has finally brought more attention to the extremely delicate situation that has been escalating over the last months around the Polish-Belarusian and Lithuanian-Belarusian borders. The scale of the influx of illegal migrants has fostered a further international condemnation of the Belarusian regime. The EU has accused Lukashenko of a “cynical exploitation of migrants, orchestrating the influx in revenge for European sanctions imposed on his autocratic regime after the brutal repression of opposition in the country”.

As the migration crisis on the Eastern border of the European Union worsened, Brussels, accelerated the preparation of new sanctions against Minsk on Tuesday, November 9. In the meantime, a debate on « who is to blame and what to do » is gaining momentum in Germany, where refugees from Iraq, Afghanistan and other countries are seeking asylum, many arriving through Poland.

However, the first clashes and conflicts on the Belarusian-Polish border had started already in Summer: the Polish Border Guard has been reporting on a daily basis since the month of August that hundreds of illegal migrants were attempting to enter the Polish territory. Around 20 thousand attempts at crossing the border illegally have been prevented since the beginning of the year. 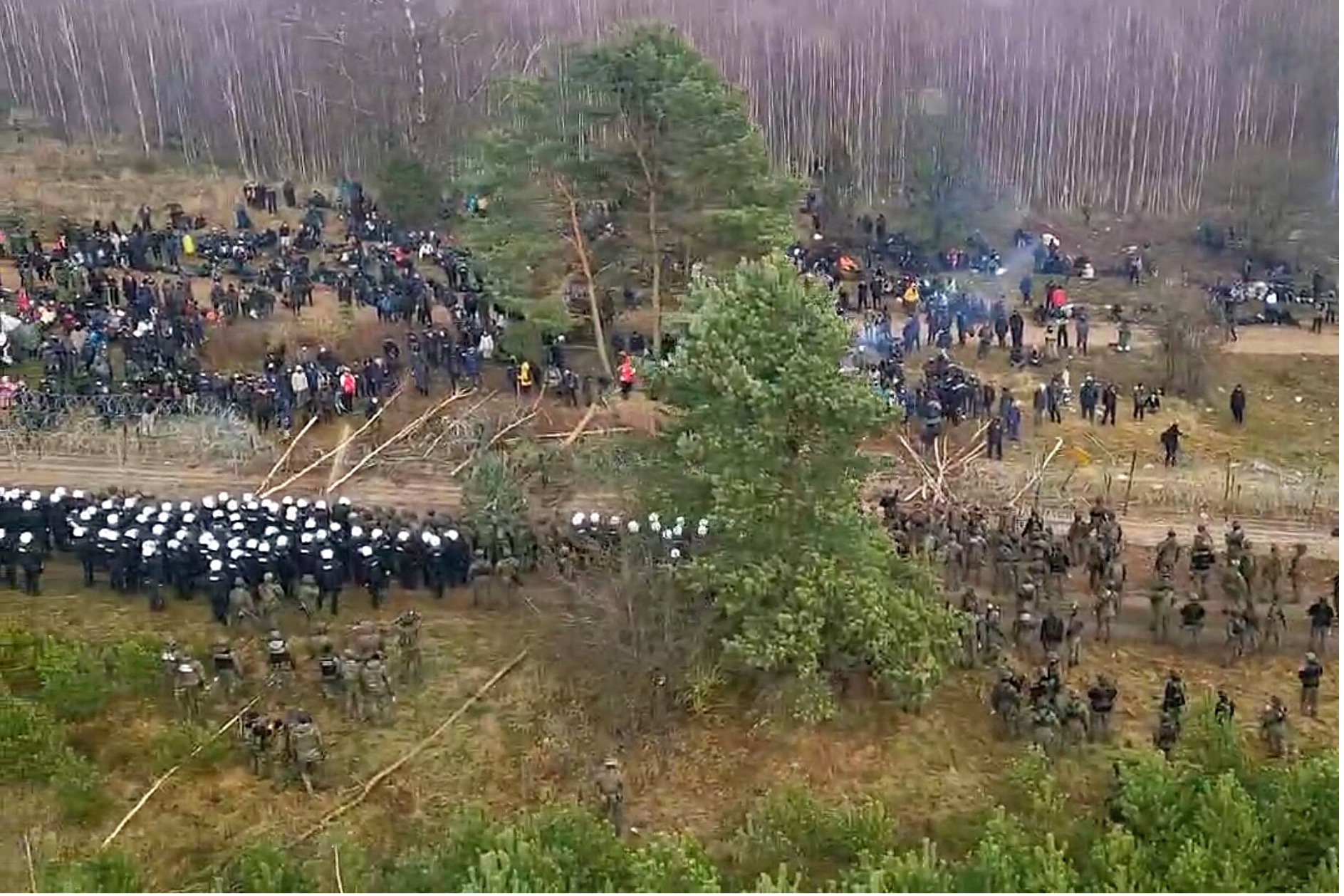 While the migration crisis is not an unprecedented matter for the EU, one should make a clear difference between the intentionally provoked and imported humanitarian disaster – like the one currently taking place on the Polish-Belarusian border – with the migration crisis evolving on the Greek-Turkish border, which brought about the refugee deal back in 2016. This said, Erdogan has not definitely been a saint, but his Belarusian counterpart is pure evil in comparison.

But to remain factual, let us see why the current crisis exists at all. There can be no doubt that Lukashenko desperately needs cash, and he is eager to “punish” the neighbouring EU countries, in particular Poland and Lithuania, for taking a hard stance not only on the continuous violation of human rights, but also on the gangster tactics (smuggling, human trafficking and even intercepting airplanes) that have been deployed by Lukashenko since his failure to secure a credible victory at the presidential election back in August 2020, when the former “father of the nation” lost the remaining legitimacy (at least in the eyes of the democratic world).

In this context, luring migrants from the Middle East and Africa through Belarusian tourism agencies (yes, the vast majority arrive on tourist visas granted by the Belarusian junta!) with the false promise of easy entry into the EU, allows the regime to obtain considerable financial resources (around $14,000 per each migrant), so that the repressive apparatus can be sustained. The provocations on behalf of the Belarusian border guards are also used as a means of escalating the tension, so that an external “enemy” can be brought up in the minds of Belarusians. This cannot happen naturally, of course, and here is when more state propaganda jumps in! 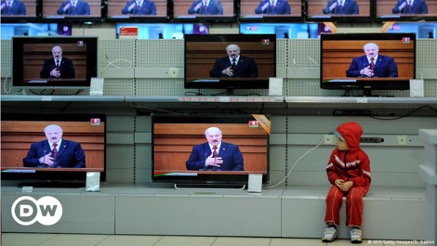 So let us take a few minutes and dismantle the latest myths that the state propaganda is trying to spread around:

There has not been a single instance of unjustified violence used by the Polish military against migrants who did not try to storm the border by force. Conversely, illegal migrants threw stones at Polish border guards, broke barriers with trees and tried to break through in droves. These people are clearly the victims of the Belarusian regime. Nevertheless, Poland cannot be expected to succumb to Lukashenko’s blackmail and put in danger the security of the European Union.

Probably the most delusional thesis of propaganda. No one has invited illegal migrants to Europe, there is not a single statement by any of the Polish or EU officials suggesting they would be ready to open the border to illegal migrants arriving from the Belarusian territory. Illegal migration is a tough topic, it concerns extremely vulnerable population segments, but it is still considered a crime. Each country has the responsibility to protect its territory from illegal entry.

This provocative question does not require a long answer. The Polish military guards not only their own border, but also the border of the entire European Union. Nobody knows what the illegal migrants are up to, it is also unknown whether some of them are connected to terrorist groups, perhaps even financed by the Belarusian authorities. Polish military is doing its duty and protecting the security of the European Union.

This is undoubtedly the most insulting statement but let us try to tackle it anyway. Belarusian authorities have, unsurprisingly, everything to do with the current cataclysm, and most directly! The artificial migration crisis was organized on Lukashenko’s personal order. It is predominantly taking place on the border with Lithuania and Poland because these countries had immediately showed resolve against the illegal seizure of power by the dictatorial junta in Belarus; they were also the first ones to implement measures and assist the Belarusians seeking asylum or relocation for political and security reasons.

So how did the migrants get to Belarus then? Special flights were arranged for the migrants, and they were met by the Belarusian special services, who supervised them on the Belarusian territory. The Ministry of Internal Affairs turned a blind eye to spontaneous migrant camps in the centre of Minsk, as well as to other law violations. Illegal migrants were driven to the border in official vehicles of security agencies, after which Belarusian border guards provided them with instructions on how to cross the border pointing them in the right direction and even offering some tools to cut wires. There is already more than enough footage to prove all of this and take the people involved to the international tribunals.  So no, Belarusian authorities are not innocent, they are the direct culprits of the humanitarian catastrophe that is only going to get worse if no serious measures are taken.

Another classic example of manipulation and playing on emotions, so common among the propagandists. Indeed, conditions in the border camps are terrible, but the migrants are suffering not because of Polish border guards are doing their legally prescribed duty, but because of the Belarusian junta, who sent them to the border and closed the way back. So now these migrants are trapped, and the poor people are simply being used to further escalate the conflict on the EU external border.

One would have to be blind to not see the benefits for the terrorist regime. It is, unfortunately, extremely profitable to the madman in power. Migrants pay huge sums of money for their transportation to Europe, this feeds the regime and keeps the air traffic afloat, otherwise there would be almost no international flights (Russia and Turkey would remain the main exceptions). Politically, the crisis on the border is also necessary for Lukashenko to draw attention away from the illegal seizure of power and a large-scale unprecedented ongoing repression in Belarus, where the number of political prisoners is deemed at 829 at the moment, which is the highest in Europe since the totalitarian regimes of the 1920s. Moreover, Lukashenko wants to get the sanctions lifted as soon as possible. He plans to achieve that by blackmailing the EU with the orchestrated migrant crisis. Curiously enough, the opposite is about to happen with the 5th package of sanctions on its way, probably coming in the following weeks. Finally, Lukashenko just wants to draw Russia into the border conflict in order to hide behind the « big brother » and squeeze more money from it through anti-Western hysteria, as he has done on numerous occasions in the past.

Having all this in mind, it would seem wise for the European leaders to take immediate action and go beyond the words of condemnation and expression of concern. Lithuania and Poland have already declared a state of emergency due to the situation on their borders. According to the EU Commission, building more barbed wire fences along the EU external border with Belarus is definitely not the best solution, especially if regarded long term. Further sanctions are just one of the logical instruments to be used, but much more can and needs to be done and reassessed if a sustainable solution is to be achieved. Some of the ideas on the table include trade suspension with Belarus (to block the significant revenues that come from the Belarusian export to the EU), ban or enhanced sanctions on all airlines involved in migrants’ transportation into Belarus, closer coordination with the issuing countries to nip the problem in the bud and unblocking humanitarian assistance funds for the hostages of the coercive acts perpetrated by the Belarusian gangsters.

[“These (referring to the sanctions) are going to hurt, going to hurt the economy of Belarus”, told the EU foreign policy chief Josep Borrell to the Belarusian opposition leader Sviatlana Tsikhanouskaya during a European Foreign Affairs Ministers meeting in October this year.]

It remains unclear if the current turmoil can be solved, or even diminished soon, but it is crystal-clear that the crisis on the EU-Belarus border has become a Pan-European problem needing a common approach. Therefore, it should be regarded as yet another endurance test for the bloc.

The publication reflects the views only of the author.