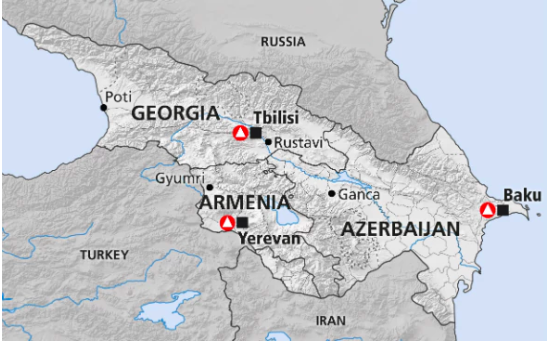 Though Japan was among the first to recognize the independence of three South Caucasus states, relations with Tbilisi, Yerevan and Baku remained limited in the 1990s. It is only in the 2010s that we saw an increased effort from Tokyo to build deeper economic cooperation. Another feature of those relations is Tokyo’s efforts to improve the South Caucasus transport corridor running through Georgia and Azerbaijan and connecting the Caspian and the Black Seas.

Japan’s position in the South Caucasus has been evolving over the past two decades. Japan traditional geopolitical expansion has historically been in the Asia-Pacific region. Very little, if at any attempts were made by Japan to penetrate economically and culturally into the South Caucasus. Surely geography played an important role. Distance between Japan and the South Caucasus precluded the two from cooperation. However, as Armenia, Azerbaijan and Georgia gained independence in 1991 and a rapid rise of globalization, there has been growing Japanese interest in the South Caucasus.

First, Japan views the region beyond a purely geopolitical dimension as compared to China. For Tokyo, due to its military constrains it was important to build a platform of cooperation upon which it would later base numerous initiatives for deepening bilateral relations with Baku, Tbilisi and Yerevan.

Such a platform was Japan’s Official Development Assistance program. The programs its priorities include disaster reduction; raising security; assistance regarding software; mobilization of Japan’s experience, expertise, and technology etc. As is seen here very little is of direct geopolitical importance. Surely Russia, Turkey, China, and the European Union (EU) work in similar areas and help the South Caucasus states, but their moves are more geopolitical than that of Japan. Perhaps Tokyo’s moves are more similar to the US’ involvement in the South Caucasus. Here too are several caveats: the US is interested in ensuring that the region does not fall back into the Russian sphere of influence, whereas Japan cannot compete with Russia. However, Tokyo and Washington, being distant powers share one similarity: the pouring of money to improve security, infrastructure and social conditions of those living in the region.

Perhaps the biggest beneficiary of Japan’s economic initiatives among the South Caucasus states has been Armenia. In fact, this is based on history of Armenian-Japanese ties. Tokyo was one of the first to recognize the independence of Armenia in 1919.

Bolshevik invasion of Armenia stopped the first contacts, but they nevertheless revived even before the collapse of the Soviet Union when Armenia was hit by an earthquake. Since 1998, Japan provided technical and expert support for the reform of Armenia’s poor energy sector. Moreover, a 40 million USD credit was used for the construction and modernization of various infrastructure in Armenia’s energy sector. This cooperation still continues as Japan now helps Armenia to reconnect the far-flung territories with modern roads and other infrastructure capabilities.

Another dimension of the cooperation is the provision of technical support for the implementation of ODA projects in the agricultural sector. There is also the Japan International Cooperation Agency (JICA) where Armenia is actively involved as a major recipient.

Armenia currently has a dynamically developing IT market and is especially interested in Japan as a major source high technology. This could serve as a solid basis for deeper cooperation between the two states.

However, when we talk about various spheres of Japan-Armenia cooperation, it should be remembered that there are no immediate economic benefits for the local communities. Unlike the EU’s China’s, Russia’s investments which bring a certain economic gain, there is little local development to be seen in case of Japan’s moves. Nevertheless, those initiatives are not entirely without merit, but are rather long-term, paving way for new initiatives. Only the projects such as educational grants and grants for agricultural producers, had an immediate economic impact for local communities.

Another state, albeit to a lesser degree, enjoying Japan’s economic aid is Georgia. There was a significant development in Japanese-Georgian relations over the past couple of years.

All of Japan’s moves and initiatives are to support Georgia’s self-sustained development. This includes helping to improve the country’s connectivity and transportation infrastructure; developing renewable energy through the provision of hybrid cars and electric cars etc. Indeed, Japan has already allocated $343 million to finance construction of the 14km long Shorapani-Argveti section of the East-West Highway, which runs through Georgia and connects Azerbaijan with Turkey and Georgia’s Black Sea ports.

Another important initiative from the Japanese side has been to lessen the travel burden for South Caucasus nationals. In 2018, Tokyo voiced its decision to ease visa requirements for Georgian citizens to promote people to people connections and deepen relations between the two countries.

If for Armenia cooperation with Japan is about geopolitics, for Tbilisi closer relations with Tokyo could produce some points of cooperation. Indeed, both states have territorial troubles with Russia and both regard Moscow’s ambitions as a certain geopolitical threat. Surely, Japan is hesitant to position itself openly in such a context, but for Tbilisi to have deeper cooperation with Tokyo is all about Georgia’s strategy of diversifying its foreign policy, finding new players able to balance Russia’s resurgent position in the South Caucasus.

As a starting point in the South Caucasus energy and transport corridor, Azerbaijan’s strategic position is clearly appreciated by the Japanese. This is reflected in bilateral negotiations when Japanese officials hail Azerbaijan’s strategic location and the progress made by the development of non-oil sector.

Both countries often hold sessions of the Japanese-Azerbaijani Economic Committee in Baku and work on increasing trade turnover which is currently growing but remains far lower than what is hoped for. For instance, in 2018 Japanese imports to Azerbaijan constituted approximately $400 million. Japan mainly imports Azerbaijan’s oil and agricultural products, while Azerbaijan is interested in increasing the import of Japanese technological novelties.

Here again, as in the case of Armenia and Georgia, Tokyo is hesitant to openly position itself in regional geopolitical conflicts such as the one over Nagorno-Karabakh. Japan limits itself to diplomatic statements on the need to resolve the issues peacefully.

Overall, it could be argued that in comparison with the 1990s, Japan’s interests in the South Caucasus grew in 2010s. It is true that Tokyo does not have a definite geopolitical agenda for the region, but it clearly sees long-term geopolitical implications of helping the South Caucasus states. For Japan, the region is an interconnector of Central Asia with the Black Sea and the Eastern Europe. In that sense, Japan’s covert geopolitical agenda could be to help Georgia and Azerbaijan develop their transit capabilities. In fact, the above-mentioned initiatives implemented by Tokyo reflect this thinking. Armenia might the biggest benefactor in terms of amount of money, but in long-term geopolitical sense, the aid to develop Georgia’s and Azerbaijan’s road infrastructure would a much bigger purpose of strengthening these countries’ ability to circumvent Russian territory. Thus, considering previous Japanese moves in the South Caucasus, it is likely that we will see continuous attempts by Tokyo to pour in money in the South Caucasus, lessen visa requirements, increase trade and develop deeper educational cooperation with the three states.