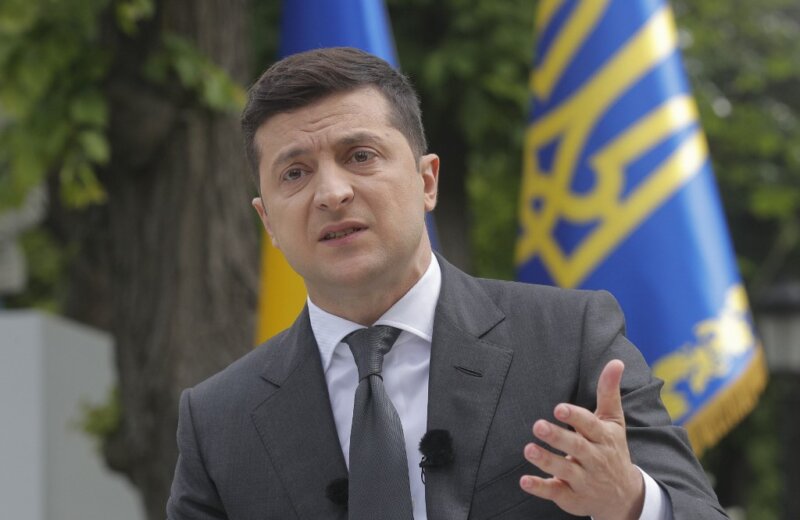 The Zelensky presidency is one year old, but the promised changes and necessary reforms are taking a long time to arrive. Renewed Russian influences, together with slow legislative motion, are two signs of how little has changed in Ukraine. The country is struggling because of the coronavirus consequences, that could be possibly mitigated by the new funding deal reached with the IMF. Nevertheless, the mechanism will provide relief to the  country only if the domestic implementation is efficient.

On April 21, 2019, Ukraine elected the new President, Volodomir Zelensky, a character who, despite not being accustomed to political life, stravinced against Poroshenko. In the previous election campaign, the former comedian was at odds with the outgoing president. With Zelensky, new possibilities finally emerged for a European Ukraine, independent and free from Russian influence. Hopes that until now seem to have been dashed. The president, especially with the beginning of the new year, seems to have retraced his steps, having given support to the likes of Kolomoisky and having replaced most of the ministries following the dismissal of Prime Minister Oleksiy Honcharuk. Zelensky thus questioned the future of reforms in Ukraine.

The turning point of the Zelensky administration can be identified in March 2020, with the resignation of Honcharuk from the office of Prime Minister. Or rather, his second attempt. The first, which took place in January 2020, had been rejected by Zelensky, who had judged the telephone tapping scandal to be unsubstantial, believing that the prime minister deserved a second chance. In the wiretapping, Honcharuk referred to the president as a « layman » (an outsider), underlining the former comedian’s lack of political experience and economic knowledge.

Zelensky, however, did not stop at Honcharuk. Instead, the President took the opportunity to renew the entire cabinet, in which a generally reformist push and will prevailed[1]. The decision had been taken by Zelensky in order to improve the effectiveness of the cabinet itself. However, the move turned out to be an extremely dangerous manoeuvre: the interruption of the political continuum on economic reforms, in order to obtain more funds from the IMF, caused capital outflows and increased financial burdens for the country[2].

Yet that funding is vital for Ukraine. The coronavirus hit the economy hard, which had started to slow down already at the end of 2019 due to the excessive strengthening of the national currency, the hryvnia. The value of the currency made the export market unaffected. With quarantine measures placed in several parts of the world, the global oil market collapsed, taking away a large slice of Ukraine’s profits and not allowing GDP growth[3].

Before the approval of the IMF and while waiting for international funds, Zelensky has already postponed the payment of some taxes, the presentation of financial statements as utility payments for companies, along with personal tax returns for individuals. In addition, large companies seem ready to support the nation during the crisis. Nevertheless, the economic revitalization of the country is slowed down by the presence of oligarchs and interest groups, as in the case of Ihor Kolomoisky. New and more substantial international economic aid will arrive only when economic reforms in the banking sector are implemented[4].

Kolomoisky rapidly became an obstacle between Kiev and the IMF. These reforms are precisely those opposed by the oligarch, who with his own interest group has slowed down the second reading of the new banking decree through the instrument of « legislative spam ». An effective strategy that has forced the government to postpone the vote until April 30. With a special legislative process, fast track, the government managed to implement the law only on May 13. Kolomoisky pushed hard to get compensation for the nationalization of PrivatBank, of which he was co-owner until 2016, when the government took control because of the $5.6 billion hole in its budget[5]. The oligarch, however, was in fact dissatisfied with the result: the decree prohibits the return to privatization of PrivatBank.

The law was strongly desired by Zelensky, in an attempt to stop the collapse of interest rates. The banking reform, together with the reform for the privatization of agricultural land, are two prerequisites inserted by Zelensky to approach the Fund’s financing. The decree will prohibit the readmission of the decision on the nationalisation and liquidation of banks. The content of this law is nothing more than a prerequisite for access to funding from the International Monetary Fund. A second step will be necessary to access international aid. The decree aims, in particular, to block any possible return to a privatisation of Privatbank. The law has also been called « anti-Kolomoisky ».

As Agenzia Nova reports, on 21 May the Ukrainian government approved the annual report for 2019 of the state bank PrivatBank. This was stated by Ukrainian Prime Minister Denys Shmyhal. « We have approved the annual report of PrivatBank for 2019: 75 percent of net profits, amounting to 24.4 billion hryvnia (836 million euros), another 5 percent of the bank’s profits will be sent to the reserve fund, amounting to 1.6 billion hryvnia (54 million euros), » said Shmyhal. The Kiev executive also approved the financial plan for 2020 of the other state subsidiaries Turboatom and Ukrtransamiak.

From the legislative perspective, Kolomoisky has established a real leakocracy to prevent justice reforms. The oligarch has in fact created a campaign against the reformers, and NGOs to support them, through telecommunication networks and social media. Especially Telegram, an app not new in Ukraine to influence public opinion and national and international politics. Leakocracy therefore refers to the Ukrainian trend, where politics, in the background, is increasingly driven by digital information wars. As if this cyber sabotage, which is very effective in the case of legal reforms, were not enough, it is urgent to remember that Kolomoisky also dominates communications in other ways, owning television networks and being accused of being responsible for the Honcharuk leak[6].

The country is in a fragile political condition and lacks the stability promised just over a year ago. The death of the reforms is only one of the negative results of Zelensky’s first year in office. Add, in fact, a renewed Russian influence on the country, the return of government figures from the Yanukovich period and, in fact, the lack of distance taken with the figures of the oligarchy. Zelensky’s popularity is falling drastically, while his party, Servant of the people, is now divided. The oligarch Kolomoisky can exercise control over 20 of the party’s parliamentary members, altering the parliamentary majority required for legislative approval. In fact, the reshuffling of the ministerial cabinet seemed more like a drastic presidential move to reverse his approval rating, bearing in mind that no one would have expected this kind of scenario after just one year in office.

The impermeability to external pressure, boasted by Zelensky, seems to be lacking in the face of this evidence. And while government leadership continues to falter, the economy is sinking: unemployment has doubled to 14% since the beginning of the crisis. And the budget deficit is set to triple from $3.5 billion to $11 billion[7]. Nevertheless, on the 9th of June, Ukraine sealed a18-month US$5 Billion StandBy Arrangement. This tool provided by the IMF when, during an economic crisis, countries often need financing to help them overcome their balance of payments problems. This measure has been working since the establishment of the same IMF, on June 1952. It is retained to be a top tier lending instrument for emerging and advanced market countries. The SBA was upgraded in 2009 along with the Fund’s broader toolkit to be more flexible and responsive to member countries’ needs.In 2009 the tool underwent to a simplifying reform, where conditions are streamlined, permitting an easier access to funds, especially enabling high-access on a precautionary basis[8].

The recent sealing of the IMF funding still does not translate in a victory for Kiev. As notably hinted by Fitch Ratings, the low level of compliance showed by Ukraine in its previous programmes, but also the long times required for the agreement, suggest that Ukraine is likely to encounter difficulties in the implementation of the new economic standards resulting from the IMF financial aid. Ukraine is not on its own: the approval of the Stand-by Agreement highlight the willingness of international partners’ and other stakeholders’ in safeguarding macroeconomic and fiscal improvements that Kiev has reached until now, but also to prevent reform reversals. The advent of the SBA is likely expected to reduce refinancing risk and maintain the recent currency improvements. But, once again, this will depend from Kiev’s capability of implementation and the hardening of the rule of law[9].

Answers and readiness are requested to Zelensky, so that Ukraine does not sink into a recession from which it would struggle to escape, without the revenue from the energy market. An oligopoly that risks to sink even with the economic relief provided by the IMF, as the 5 billion dollars do not target primarily this market, nor the amount of money would be sufficient to sustain the survival of what has been saving Kiev’s economy from gloomy days in the past years.

This article is an extracted and updated version of a previous author’s publication on Babilon Magazine, available online: https://www.babilonmagazine.it/ucraina-e-gli-oligarchi-un-anno-di-zelensky/