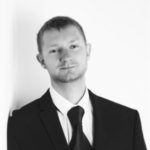 Global analyst & translator specialising on the EAEU and the CIS

Nikita Taranko Acosta grew up in an international environment. He comes from a bilingual Russian-Spanish family and was born in Minsk (Belarus) and raised in the Canary Islands (Spain). Nikita has started his professional career by obtaining his Bachelor’s Degrees in Translation and Interpreting at the Faculty of Translation and Interpreting of the University of Las Palmas de Gran Canaria in Spain (2011) in addition to a Bachelor’s Degree in Multilingual Communication at the University of Geneva (2013). During his studies, Nikita had the chance to complete several academic, professional and linguistic stays abroad in various European countries, apart from participating in several exchange programmes in Switzerland and the UK. These experiences helped to enhance Nikita’s linguistic skills (he is currently able to communicate fluently in Spanish, Russian, English, French and German) and aroused his interest in international politics and in the concept of “Global Citizenship”. It is after undertaking a module in Russian Studies at the University of Manchester (2015) and due to his personal background as well as a deep attachment to the post-Soviet space — namely to the Eastern Slavic countries (Belarus, Russia and Ukraine) — that Nikita decided to diversify his profile by following a Master’s Programme “Russia-Median Europe” at the Global Studies Institute of the University of Geneva, hoping to acquire the necessary tools and knowledge to work on the economic and sociopolitical issues of the region from a transnational angle.